After a Raspberry Pi A, a Banana Pro and a x86 mini PC I recently purchased a Super Micro X11SCL-IF motherboard for the next iteration of my homelab. 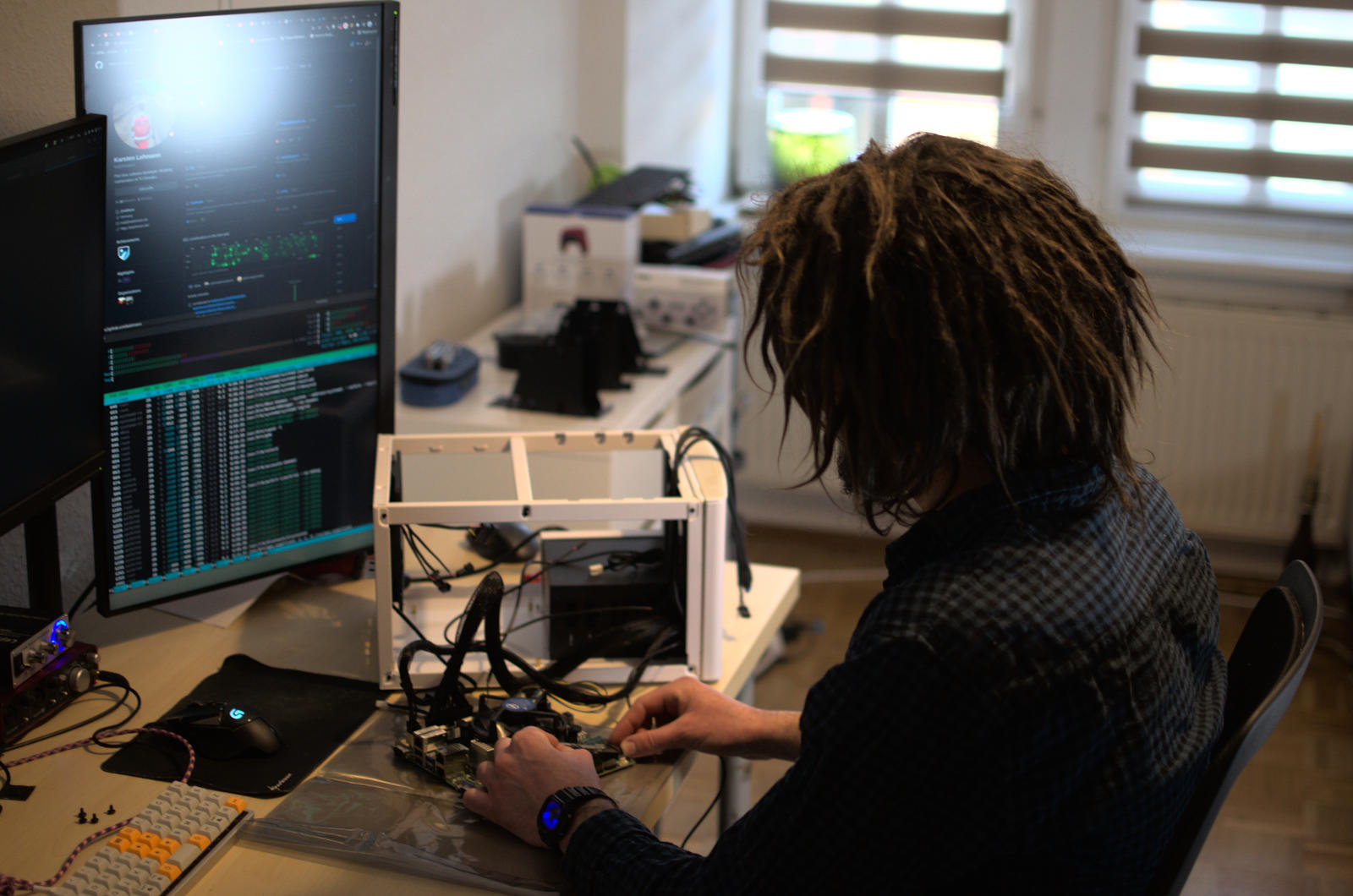 This document covers how to enroll your platform keys in the UEFI of this motherboard and use secure boot with Arch Linux. First start with some basics:

UEFI: The Unified Extensible Firmware Interface is an interface specification for the communication between the operating system and the firmware and replaces the legacy Basic Input Output System interface. The term UEFI is often used for both the specification and its actual implementation. As advantages over the legacy BIOS interface, the UEFI specification includes among other things network capabilities, support to boot from disks larger than 2 TB and the ability to store data in (non-volatile) UEFI variables.

UEFI Application: An UEFI application, also EFI application or EFI binary is a special binary, that can be loaded by the UEFI firmware and uses functions provided by the firmware to perform various tasks.

Secure Boot: Secure Boot is a feature of the UEFI specification that detects tampering of the bootloader or the kernel of the operating system by validating their digital signatures before running them.

IPMI: Intelligent Platform Management is a standardized interface for platform management running on the Baseboard Management Controller. The BMC is a micro controller embedded into the motherboard and always powered on. It’s features are hardware monitoring and remote manage like powering the system on and off or mounting ISO images. The term IPMI is often used as a synonym for the web interface of the BMC.

UEFI uses the following variables for the secure boot process:

PK (platform key): The platform key is the top level key in the secure boot process. The variable can either be empty or hold an EFI Signature List with exactly one entry - the public half of the platform key.

KEK (key exchange key): The variable KEK holds a EFI Signature List with keys to update the signature database or sign binaries. Changes to the variable KEK must be signed with the platform key.

Various guides in the internet, like Microsoft’s Windows Secure Boot Key Creation and Management Guidance or the UEFI Specification in Version 2.9, Section 32.3 recommend 2048 bit keys, however I experienced no problem with a public key size of 4096 bit of the X11SCL-IF board. Generate the keys with

Here openssl req is invoked with the following options

Manually enrolling the keys in the firmware from a USB stick requires certificates in the DER format. To convert the certificates from PEM to DER use

Now use the cert-to-efi-sig-list command from the efitools package to create EFI Signature Lists from the certificates:

The next step is to boot a Linux system on the board to enroll the keys.

First connect the dedicated BMC IPMI LAN port to your local router. This dedicated port is located right above the serial port. 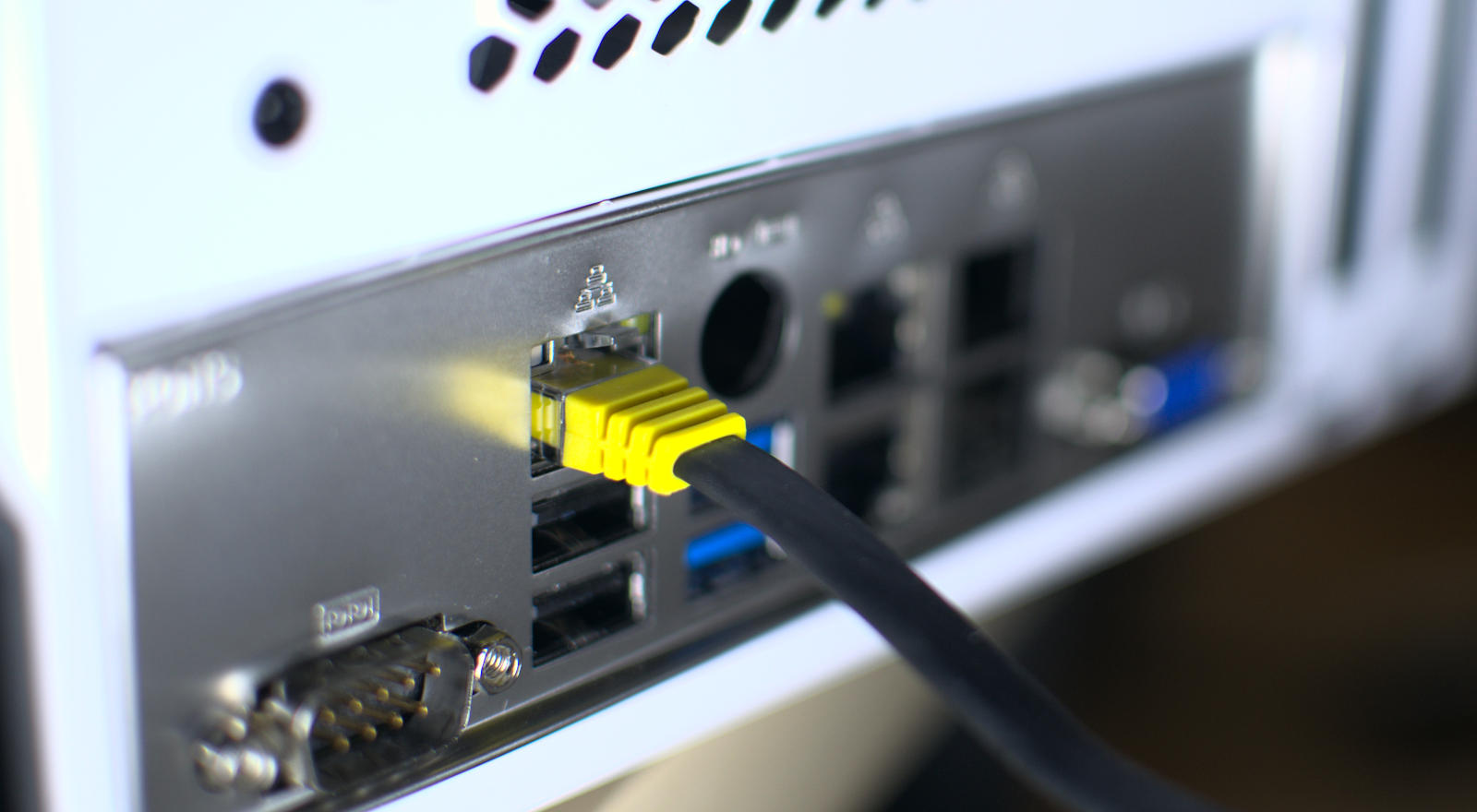 The IP address of the BMC can be identified with nmap. Run

and watch out for a result similar to

Now the web interface can be accessed under its ip address in the browser, e.g. https://192.168.178.129. The certificate warning can only be ignored as its Common Name (CN) is “IPMI” and all modern web browsers convert hostnames to lower case - so even a hosts or DNS entry would not help. However a custom certificate can be rolled out later.

The default user is ADMIN and for older boards the factory password was also ADMIN. Newer boards a configured with a random factory password. This password is printed on two stickers, one directly on the motherboard and the other on the protective chassis of the CPU socket. 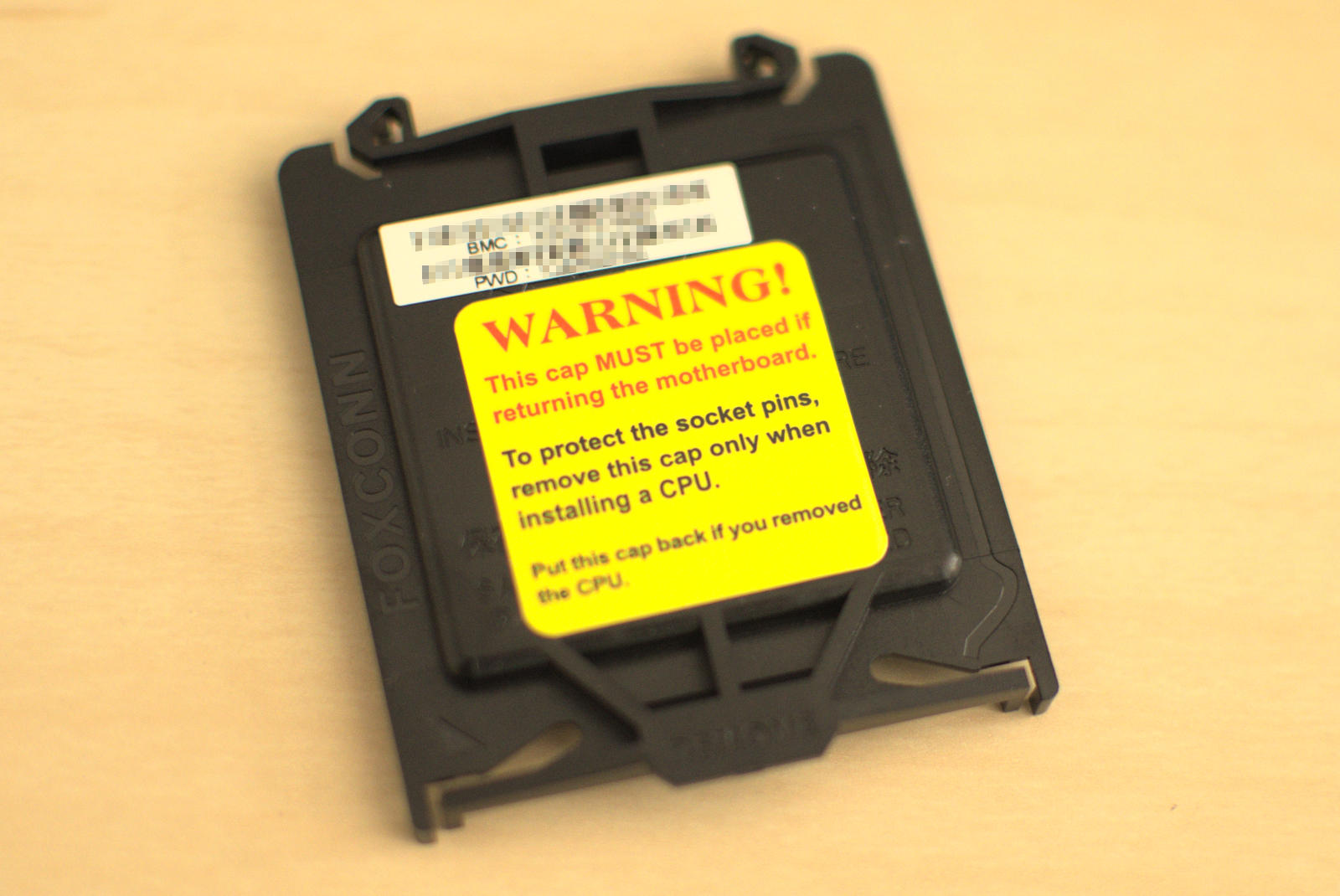 More information about the stickers and the password is available in the Super Micro BMC Unique Password Guide.

Some really useful functions like mounting virtual media from the web interface require the additional activation of a license. Fortunately Peter Kleissner already reverse-engineered the algorithm to generate the license key. Short summary: Gather the MAC address of the dedicated BMC LAN port and run

where {your mac address} is replaced with the MAC address (in lower case and bytes separated by colons) to generate the key.

Go to Configuration -> Date and Time. There enter two NTP servers of your choice, your time zone and then proceed with Save.

I choose the time server of the Physikalisch-Technische Bundesanstalt as primary server and of of Google’s time servers as secondary server.

Start by downloading the file ipxe-arch.efi from the Arch Linux Netboot page. Now create a floppy image with the netboot UEFI application:

Now go to the BMC web interface and upload the floppy image under Virtual Media -> Floppy Disk. Then click Upload and confirm the dialog.

Upon the next boot hit F11 when prompted to select the boot device. A new entry named UEFI: ATEN Virtual Floppy 3000 should appear. 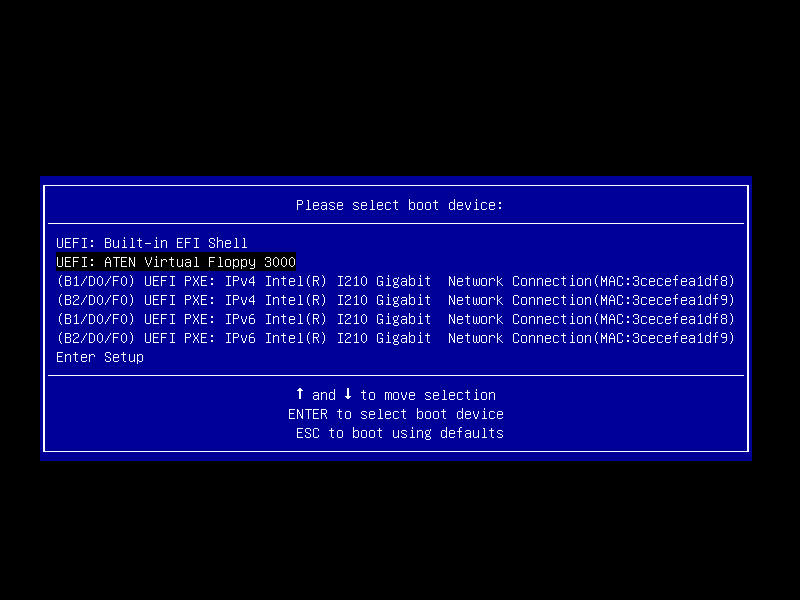 Make sure another LAN port than the dedicated BMC LAN port is connected and boot from the floppy. Now iPXE should load and boot Arch Linux.

Now fill out the form with the data for your ISO image:

Now first press Save, then Mount.

Oops! Something went wrong. Could not perform the operation

to the samba configuration and reload the service with systemctl reload smb.

Setup a SSH connection to the live system to backup already existing keys and transfer the keys created before onto the machine. SSHD should already be configured and running in the live system. This can by verified by first checking that the root user can login with

The line PermitRootLogin yes should be outputted. Then check that SSHD is running with

Inside the live system install the packages efitools and sbsigntools:

Then call efi-readvar. On a new board no keys should be setup and the output should look like

If there are any existing keys, better back them up with

and transfer them to another machine using scp:

Enroll the keys in the firmware

Now on the live system place them in the correct location for the tool sbkeysync from the sbsigntools package:

Then perform a dry-run of the enrollment:

Verify that all of the certificates are listed and no empty authentication header was created by accident. The result should be similar to

After that enroll the KEK and db variables

and finally the PK variable

The result can be checked by calling efi-readvar again.

Install the operating system from a signed installation medium

While the keys are now enrolled secure boot is still disabled. Reboot the system and press DEL when prompted to enter the setup. Navigate to Security -> Secure Boot and set Secure Boot to Enabled. After that navigate to Save & Exit and hit Save Changes and Reset.

Booting an unsigned application or image should now fail. 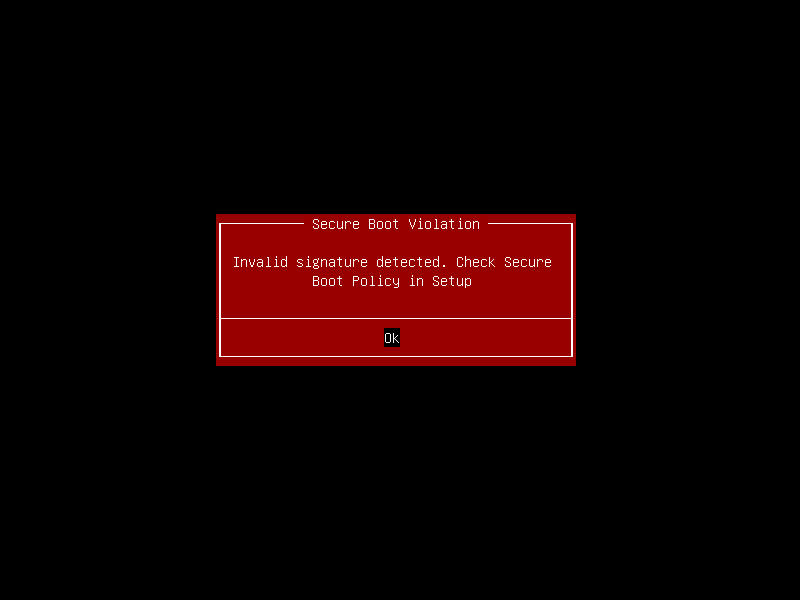 First sign the Arch Linux Netboot UEFI application with a key from the signature database:

and create another floppy image:

You can now boot iPXE, but will not be able to boot a kernel from an official mirror because they are not signed.

To sign the kernel first download the necessary files from are mirror of your choice and create a iPXE script that loads all components. In the following the mirror of the University of Technology Chemnitz is used:

After that boot the signed iPXE UEFI application as described before and select Drop to iPXE shell. There first allow untrusted images by executing imgtrust --allow.

Warning: Only proceed in a trusted network. A potential attacker can now manipulate the microcode and initial ramdisk images as they are transferred without any notice.

Then chain the iPXE script from above:

If one cannot or does not want to use netboot, there is the option to create a remastered installation medium with a signed bootloader and kernel.

Now create a custom profile based on the standard releng profile:

Then create a pacman hook that triggers after an installation of the kernel:

Next add the sbsigntools package to the installation medium:

and then create the ISO file with

The ISO image should be located in /tmp/out_dir and can now be booted as described above.

The installation process is already covered in the Arch Linux Installation Guide. Before the installation the secure boot status can be checked with the command mokutil from the package with the same name by running

Without any additional configuration the system would refuse to boot the new kernel after an update because it is still unsigned. There is a tool called sbupdate, that provides a pacman hook to automatically create a unified kernel image signed with custom secure boot keys. It is available in the Arch User Repository as sbupdate-git.

After the installation of sbupdate, the signature database key and certificate needs to be copied to the directory /etc/efi-keys. The recommended way to do this is using scp:

Note: the tool sbupadte assumes the signature database key and certificate names to be db.key and db.crt (uppercase, e.g. DB.key is also allowed).

The signature database key should be only accessible by the root user:

Now edit /etc/sbupdate.conf, uncomment the line with the CMDLINE_DEFAULT key and add your required kernel command line parameters, for example the root file system. For all the other keys the default values should be sufficient.

After that reinstall the kernel to check the configuration and create the signed image:

Adapt --disk and --part for your system.